Junior and I went to a little playgroup meeting this morning in a nearby moshav. In between the chatter about toys, food and general kids’ stuff we couldn’t quite escape the news.

One of the kids got hold of the TV remote and turned on the box, her mother flipping the stations to find the children’s channel. On the way she couldn’t help passing a couple of news broadcasts. One of the little girls called out, “Zikukim!” – fireworks – as a brief image of explosions came on the screen.

“So that’s how you explain it to her, fireworks?”, one of the other mothers asked.

“What else am I going to say? She is too young to be told what those pictures really show, and in times like these I need to see the TV news but I don’t want them to know what’s going on. This is my way of shielding them.”

“We do the same,” concurred a third mother. “My older ones know that the broken buildings are ‘under construction’, pictures of ‘building sites’.”

Talk turned to family and friends up north.

“You know that’s why I was late this morning. We have a full house at the moment,” said M. Her sister and family live in one of the kibbutzim close the Lebanese border and had come to stay with her to escape the war.

M herself had only just left the border in time. She and her children had been spending a family holiday with her sister, enjoying the gorgeous location and kibbutz swimming pool.

Then one day they heard some very loud booms.

Her sister called from work and told her to stay indoors, not to take the kids to the pool and to seek cover, she would be right home. They had just heard the first wave of Hizballah’s new offensive – shelling and rocketing ’s northern border.

M packed up her young children and baby and got on the first bus going south. Shortly afterwards the first Katyusha rockets slammed into the grounds of the kibbutz.

Another mother mentioned that her neighbour was also hosting a northern family. Like many Israeli towns, the municipality has organized a hospitality programme for people from front-line communities.

H noted that many families up north might want to travel south but don’t have the cash at the moment. In a recent phone call northern relatives told her that local people are running short of cash because the banks are closed due to the situation and no one is refilling the cash machines.

Her family are originally from Tzfat (Safed) and many still live there. So far the city has suffered more rocket strikes than any other but her relatives are determinedly staying put. Like many crisis-seasoned Israelis, the first thing they did after their town was hit by Katyushas was to rush to the supermarket and stock up on water, dry goods and batteries. Cash or no cash, they were well stocked for the duration.

As I arrived home my mobile rang. It was Tzohar, an umbrella organisation for religious Zionist rabbis. Since the crisis began they have set up a hotline to help the northern communities. They were looking for families to host people from the north, could we accommodate a family of three and their dog from Karmiel?

Posted by Princess at 01:24 No comments:

Before anyone starts worrying, these are not recent shots, but some photos from a trip up north a few years ago. Just so anyone who hasn't visited knows what a wonderful part of the country this is. 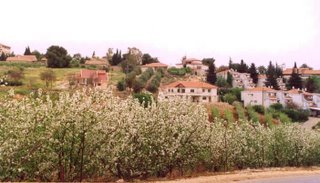 The Israeli border town of Metulla in better times.Visiting there a few years ago you could see the Hizballah flags and positions right up near the border fence. For the last few years, ever since Israel pulled out of Lebanon, farmers from the town have risked Hizballah attack every time they tend to their orchards which with the redrawing of the border by the UN are now right up against the border. 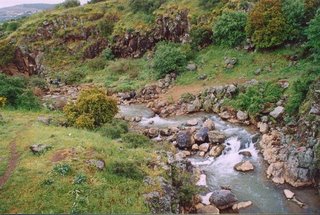 Saar waterfall
Posted by Princess at 17:32 No comments:

Evil from the North

It's been quite an eye opener reading the foreign press. The game is how far do I have to read until I realise that was a)attacked first and b) that is suffering hundreds of rocket strikes from Hizballah controlled southern .

A few friends who e-mailed me from overseas mentioned that while they hope Im safe, they really must protest behaviour. Why dont we negotiate with Hizballah? Why isnt our response more proportional?

How do you negotiate with someone whose stated goal is your destruction? Someone who regularly swears his allegiance to your annihilation and rejoices at the death of every Israeli man, woman and child?

As for proportionality, Im tempted to reply, well, do you want us to randomly mount a border raid and kill 8 Hizballah guerillas and kidnap two more, or in response to rockets fired at Israeli cities should we willfully target residential areas in ? Should we perpetuate this mad game of Hizballahs invention or should we try to bring it to a halt and create an atmosphere where neighbourly relations with just might be possible?

Watching the news footage from I can understand why these friends feel uneasy. War is not a pretty sight, however just your cause, however pure your motives.

Whoever said war is hell knew what he was talking about, but standing by and letting Hizballah pick off Israeli soldiers and civilians at their leisure is more hellish still.

has to defend itself, no sovereign state can allow hostile militas to cross its border at will or rockets to slam into its population centres and not react.

During the Oslo War of 2000-2003 about 70% of Israeli casualties were civilians, willfully and intentionally targetted by assorted terror groups - is fighting on two fronts to prevent this from happening again - it is the responsibility of every sovereign state to protect its civilians.

is not randomly lashing out, but targetting the infrastructure used by Hizballah to transport arms - roads from (a key Hizballah sponsor), and airports and ports, fuel depots, munitions dump and Hizballah positions. The A-Dahya neighbourhood of souther is a Hizballah stronghold. Unfortunately Hizballah offices, outposts and the like are usually in civilian areas, and by the nature of war there are tragically unintended civilian casualties. To this end has distributed leaflets encouraging civilians to leave the areas affected, because doesn't want civilians do be harmed.

If was trying to assault Lebanese civilians as the article alleges far more than 200 would have been killed in the first week of fighting.

The Lebanese government seems to think that they can let Hizballah attack from Lebanese territory and then deny any responsibility for the consequences. If can't or won't stop attacks on from its sovereign territory than has no choice but to defend itself. Israelis have sympathy and warm feelings towards the people of and have enjoyed long periods of defacto peace in the past before assorted militias took control of the south. If could erradicate the threat from Hizballah without harming the rest of be assured that would.

Israelis were hoping that the pullout of in May 2000 to the United Nations certified international boundary "blue line" and more recently the Syrian pullout of would allow a new chance for normal relations with .

has acted with restraint for six years, despite Hizballah's border raids and constant bragging about how it was stock piling thousands of missiles that would bring all of 's population centres within range.

don't not want to cause suffering in , but neither can sacrifice its citizens and allow them to be held hostage to Hizballah border raids, shellings and rocket attacks.

Posted by Princess at 09:38 No comments:

The north and the south of it

Having a super active high need baby does make it difficult to sit down for long enough to actually write something coherent, but under the circumstances considering the deluge of e-mails and phone calls we’ve had I thought it might be prudent to at least try.

Everyone wants to know how we are doing, how we are “bearing up”. I admit it’s a little strange being asked that question. Small as is, thank God, living south-east of Tel Aviv, as of now we are nowhere near the front lines or the areas under attack.

After several phone conversations I realize how hard the whole situation is to convey to folks abroad who watch their television sets and don’t understand how where I live in central Israel, life goes on pretty much as normal and an hour and a half drive away to the north people are in their shelters under rocket bombardment.

Still, is the kind of place where everyone is no more, and often far less, than six degrees removed from everyone else and pretty much everyone I know has friends and family somewhere in the country who are directly affected by current events.

Shabbat afternoon in the park the lady pushing her child on the swing next to my daughter's had just received a call from her family up north.

That afternoon Hizballah fired rockets at Tiberias. This family were unharmed, but when they called friends in Carmiel to check in, they found out that one of the rockets fired at Carmiel that day scored a direct hit on their house there.

Those of us living in so far unaffected areas are well aware of Hizballah’s threats to get us too.

Only yesterday the Israeli Air Force hit a missile launcher carrying an Iranian made Zilzal missile – a weapon with the range to hit the greater Tel Aviv area. The strike on the launcher caused the missile to misfire, sending it careening into a junk yard of old tires where it started a massive fire.

The funny part, if one can find the humour in all this, that Hizballah’s Al Manar TV and other Arabic stations saw this thing falling from the sky and reported that an Israeli aircraft (God forbid) had been shot down, even claiming to have captured two pilots – thank God both reports turned out to be untrue. You could say they had egg on their faces when it turned out that the “Israeli plane” was actually the very missile Hizballah was planning to launch at Tel Aviv.

Just in case there are more of these though we have cleaned out our shelter, set up a tv with and other kids videos in there and stocked up on canned and dry foods and water - things that always come in handy. Odds are I’ll be making a lot of tuna and corn casseroles over the next few months.

I guess that answers your questions about whether we have a shelter. Pretty much everyone in has one: in offices, public buildings, malls, houses and flats or a communal neighbourhood shelter which usually doubles up as a community centre or synagogue. It’s just a fact of life.

For those who say I’m too calm, most everyone I know is, even some people I spoke to in their shelters up north.

It’s kind of scary, but we've been through worse and God willing we will get through this.

Posted by Princess at 09:05 No comments: