If we didn't have to choose a place of residence based on mundane considerations like jobs and work and stuff like that I think our family would long ago have moved to somewhere in the boonies, probably out in the desert.
I think it each time we visit some desert boiberik community, feast my eyes on those bleak vistas and feel the cool chill of an evening desert breeze and my soul just screams to me that this is where I should be, not cooling my heels in the Middle Eastern equivalent of white picket fence country. Oh, but practicality rules and darn if we don't have to consider things like commuting distance and job markets.
I got a double dose of desert fixes last week, Judean and Negev deserts in one week, both as enchanting and soul searing as ever. Truly, it hurt to leave, however much I like my home, and really, I do, well, most of the time.

Mitzpe Ramon perched on the rim of the dramatic Ramon Crater (Makhtesh Ramon) really takes the soul food cake for me though. As towns go it's a tiny, neglected one-horse affair of a place (well, maybe 2 or 3 horses, but it doesn't look big enough for that). But look out beyond that aging low-rise tenements and the old concrete prefab houses and your heart gets caught in your throat as the red cliffs drop away to the vast Makhtesh in all its multi-hued rough and ready glory. 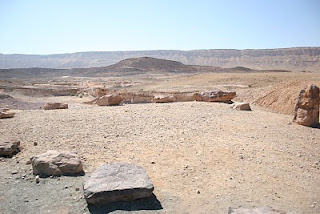 I finally fulfilled a long-time dream this week and went out there to view the Perseid meteor shower. The town is home to Israel's biggest telescope and a team of astronomers taking advantage of the high elevation and clear desert skies. And the town takes advantage of them, promoting events like the Perseids to bring visitors in, though I think most of the folks who crowded in to the town's sad little football stadium (think scrubby field with a fence and a few rows of bleachers against one wall) were locals or at least other southerners.
The municipality turned off all the town's lights for the event and the effect was just incredible, so many stars and so many constellations and a bevy of astronomers with telescopes to show you delights like the bands on Jupiter or a binary star system (I will never doubt SF writers again, well, maybe at least a little less).

Sure, early on in the evening there were annoying crowds of noisy families waving their torches (flashlights) around and screwing with my night vision, but then there were also fascinating lectures and for the grand finale, before the astonomers went of somewhere even darker, there was a guided tour of the desert sky with laser to point out the constellations usually washed out by the pollution of urban glow.

Then the astronomers left and we common folk were left to just enjoy the show.The pose of girls behind me were musically inclined and kept bursting into song. Fortunately they were all blessed with beautiful, melodious voices. Seemed to be into Israeli oldies, which was kind of surprising for a bunch of late-teens and 20-somethings, but that was kind of cool, seeing as I kind of dig that sort of thing myself. Even found myself singing along some of the time.

The middle-aged guys camping out to the left spent most of the time yakking about their army days in the 70s, who served when, where and how, occasionally lapsing into arguments over which remembered buddy had done what when. It was kind of like listening to some classic Israeli comedy from 30 years ago. Then they lapsed into car buying talk and I zoned out because, well, minivan versus small truck comparisons in the wee hours just doesn't do it for me.

It was actually kind of nice to lie back on my blanket at around 02:00, the kids finally asleep snuggled up next to me against the desert chill, watching the lazy streak of meteorites across the sky. And yeah, I've seen more spectacular meteor displays, truly I have, but I still enjoyed this one, some incredibly bright ones, clearly flaming, red taking many seconds for their trails to fade from the sky.

Beautiful or not it was damn cold.

That was a real treat for Israel in August.

By the Perseid peak at 03:00 most other folks had either left or gone to sleep, and it was so wonderfully peaceful and the vast starry sky was so achingly mind blowing that it felt like a religious experience, the secrets of creation just spread out like a treasure map for me to puzzle out.

I guess when all is said and done I really am kind of sappy at heart.

And yes, I will confess that Don Maclean did briefly flit through my mind, but Matti Caspi gave him a firm shove, followed by, well, Psalms. And Led Zeppelin. No, I don't know why, it just seemed fitting.
Posted by Princess at 21:59 No comments: