My sister answered the phone Tuesday night with Tisha B’Av in her voice. She just got word that a friend was critically hurt in the fighting in .

When I SMSed her a few hours later to see how she was doing, her reply was a curt, chilling two words: hu neherag – he was killed.

Taking in the newspaper Wednesday morning, the glaring headline mentioned the name of only one of Tuesday’s three casualties, an uncommon name from a moshav close to Modi’in. With a sinking heart I realized without a doubt we knew this family too.

The phone rang again. This time it was my husband with Tisha B’Av in his voice. “Have you heard the news? Did you hear the names of the soldiers?”

One of the fallen, Yehonatan Einhorn, was the son of a man my husband sings with in a local hazzanut choir.

Wednesday found us packed in among hundreds of mourners pouring into ’s Mt Herzl military cemetery. A calm, sombre crowd quietly escorted the 22-year-old paratrooper on his final journey.

We arrived just as the military hearse did.

To the chanting of a Psalm, a group of young paratroopers lifted the coffin draped in the Israeli flag and made their way up the stone stairs, followed by an honour guard and more soldiers, many straight from the front. The throng of mourners fell in behind while a posse of media cameramen pursued the best shots of raw grief.

The area around the open grave was cordoned off to provide the immediate family and honour guard room to breathe. Nearby wreath and pebble covered mounds marked the fresh graves of other soldiers killed during the current war.

People continued to file in as the earth was filled in over the coffin and the bereaved father uttered the Mourner’s Kaddish in a voice cracking with emotion.

My husband was visibly shaken. “It’s hard to see such a cheerful man so broken,” he said to me through tear-bleared eyes, “he always has a ready smile, an optimistic word, it’s agony to see this happen to such a man.”

It was disconcerting, especially in , to see such a large crowd stand so quietly. Even the crying was muted, restrained, without dramatic outpourings of anguish. The pain was clearly etched on the mourners’ faces, but most seemed to bear it with a dignified resilience.

The birds too were silent, despite the ample trees. Only the sporadic wail of ambulance sirens from the nearby Sha’arei Tzedek hospital broke the stillness.

The scattered trees were insufficient to shade the multitude from the harsh mid-afternoon sun. An intermittent breeze brought some relief from the stifling heat, bringing with it the refreshing scent of native pine trees and rosemary bushes.

A few soldiers handed out bottles of iced mineral water from an industrial sized cooler, but the supply was woefully inadequate, and people passed each bottle around, taking a sip, briefly placing it on their forehead and passing it on to whoever looked like they needed it most.

Eulogies were given by family members, by his commander, by rabbis who taught him and by people from his village. The pervading theme was Yehonatan's great humility, piety and devotion to and the Jewish people, a young man who embodied the true ethics, spirit and resolve of the IDF.

Many of the speakers pleaded with the government to make sure that this time the army is allowed to do their job, that Israel fight Hezballah until it is no longer a threat, rather leaving it strong enough to regroup and start this whole terrible war all over again in another few months or years. Our soldiers must not have died in vain.

The parents remain fixed in my mind. Two sweet, humble, religious Jews bravely meeting the most terrible of all with acceptance, faith and understanding. They spoke with such warmth and such love, and no bitterness, only determination that their son died doing what was right to defend his country fighting for its life, doing what he believed in.

The father spoke last of all, with words of such power and courage that I cannot even try to convey them. Yehonatan literally means “God gave”; he thanked God for giving him his son for 22 joyous years. He ended with a plea: Dai – enough, God, please end the constant attacks on our country.

The next afternoon, Tisha B’Av itself, I was back at Mt Herzl, this time to pay respects to my sister’s friend, Michael Levin, an American oleh killed in the same battle.

As on Wednesday the mourners included soldiers wounded in and others who had come from the front, a sea of red paratroopers’ berets peppered with the colours of other units.

There were also groups of English-speaking youth visiting on summer programmes, who had been brought to the funeral to learn about the Zionist ethos and to gain an insight into Israeli life. A group of them entering behind me didn’t even seem to know whose funeral they were attending. “So who is this dead soldier?” one asked his companion. “An American immigrant, from Philly I think.” “No, really, an American in the Israeli army?!” “Yeah, it’s going to be a military funeral, I hear they shoot guns and stuff.”

As I was leaving, a counsellor was addressing a British group, trying to convey to his charges all that this young soldier embodied in his life and death – self-sacrifice, devotion to his cause, idealism and the courage to pay the ultimate price if that is what the defence of requires.

Some of these wide eyed kids from abroad were clearly overwhelmed by the whole experience. Others brushed off the heavy emotion of the occasion with glib jokes and bravado.

The eulogies were briefer, simpler than at yesterday’s funeral, but they were no less moving or heartbreaking. They painted the portrait of yet another special, dedicated young man whose abundant promise had been cruelly and abruptly cut short, a man who crossed thousands of miles to fulfil his childhood dream of living in and defending his people by serving in the elite IDF paratroopers.

His commanders spoke movingly, one reciting a poem he had written in beautiful literary Hebrew in memory of the fallen soldier. Several of the Israeli speakers did their best to say a few words in English, for the benefit of family and friends unable to understand Hebrew. Their heavily accented, mistake-riddled English did nothing to diminish the obvious sincerity and love in their words.

Long after the huge crowds had left, a knot of close friends, family and comrades-in-arms clustered around the fresh grave, weeping, talking, singing mournful Carlebach songs and remembering.

The press with their intrusive telephoto lenses stayed too, hoping for a good snap of the bereaved, the fresh pain, sorrow and shock on their youthful faces, bright eyes glazed with tears and disbelief.

One girl commented to her friend about how shocked some of the American family had been to see the media at the funeral. “Mike would have liked it, though,” she responded. “He would have loved all the cool cameras.”

Hard to believe that only about 10 years separate me from them, though they seemed so young, so innocent.

As I hugged my sister at the graveside I had no words of comfort for her, all I could do was to be there. I was about her age when one of my classmates was killed in the previous war. I knew how she felt, but there was no consolation in saying so. At the moment of loss it feels as though no one else can possibly understand.

Standing beside Michael Levin’s friends, the memories of that terrible day seemed as fresh now as they did all those years ago. Time may bury the ache, but it is always just beneath the surface. 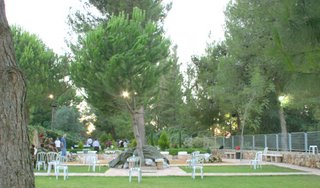